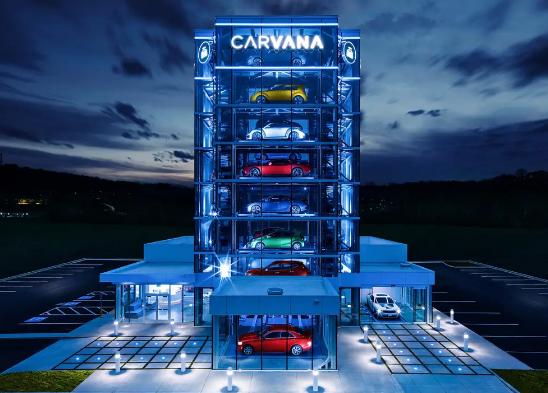 Carvana was founded in 2012 by Ernie Garcia, Ben Huston, and RYAN Keeton. The company is a used car retailer and engages attractive financing models for its growth. The company aimed at revolutionizing the car buying experience. The company went public in 2017 and started soaring in 2020 during the pandemic. The company in 2021 caught the eyes of investors as its stock on the New York Stock Exchange soared.

The Rise of Carvana

Notably, the company has never posted an annual profit as it was hugely focused on growth. The company was investing more on car vending machines and marketing such as in the super bowl. Fortunately, the company saw a spike in sales and consequently its stock value. In February 2021, the company’s CEO Ernie Garcia attributed the increased demand and excellent performance to a consumer psychology shift during COVID. The business model was friendly to clients who were in an almost virtual world. Clients would buy a car online and have it delivered without physically stepping at the car dealers’ premises.

Carvana would offer its clients low interest loans that made it affordable to a wide market hence more sales. Further, the company would sell its loans to investors. The loans would be packaged into a debt and sold to investors as a form of securitization. This helped Carvana gain almost immediately by writing loans off its balance sheet.

The Fall of Carvana

In August 2021, the company’s stock started noting pullbacks. It was a phenomenon across many companies. There was no call for alarm and the company went on to acquire a used car retail company Adesa in May 2022 for $ 2.2 Billion. This was in a bid to consolidate its strength and market share in the used car retail business. In April 2022, Carvana, reported its quarterly sales decline for the first time. The report prompted investors to keenly look at the granular details of the company.

It was evident that there were fears of a rising inflation and looming recession. Consumer demand had slowed while spending was on a decline. This further reduced investor demand and in July 2022, the company stocks fell to near zero territory. Carvana went on to lay off almost 12% of its staff.

In the same month of July, the state of Illinois suspended Carvana from operating in the state over concerns of temporary car registrations. By the end of July 2022, Carvana was issued with a temporary restraining order that allowed it to temporarily continue operations in Illinois.

Carvana had recorded a 95% value decline in one year.

What’s Ahead for Carvana?

Carvana is now focused on cutting costs and increasing efficiencies. The company also wants to sell its loans to financial institutions.

Will Carvana into the future give its investors, founders and clients a good feel experience that is synonymous to the company’s close homonym Havana?

What made Airbnb Grow And Succeed?

How to Disrupt the Pharmaceuticals Industry, A Mark Cuban Story

Is Real Estate a Lousy Investment? A Buffet Perspective.

What does Dividend Investing Offer?